Well, what to say..I may think that it´s time to get these young cubans logged on to the Internet. 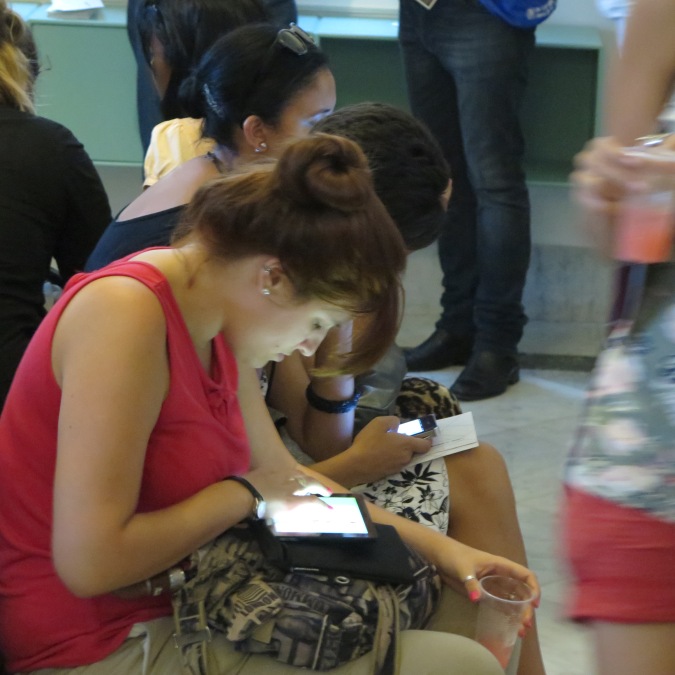 The opening of the performance “Static” in the Norwegian Embassy in Havana in September 2014.Foto: Birte Runde

This was in september 2014. I had just arrived Cuba, and was shocked when I heard these young cubans telling me that they couldn´t afford to go on the Internet. During this opening of Fidel Garcias “Static”, a bunch of people came to use the free Internett at the embassy 🙂

And of course to see the art.

Fidel Garcia is one of the more oppositional artists in Cuba.

“Static” is a performance that last from December 2013-September 2014. In Death Valley, Nevada, in California, he placed a radiotransistor as an installation, tuned in to the cuban nacional radio, Nacional de Radio Cuba. 24/7, the sound of the cuban announcements, filled the valley with no meaning, only words. In an artistic way, subtily, he describes the cuban media – that gives no information of interest.

– Now, we have to give Cuba a new start, expressed the writer of the book “Det nye Cuba” (The new Cuba), Even Underlid, thursday at the Cuba-conference in Litteraturhuset in Oslo.

Together with the two other experts in Cuba, Borghild Tønnesen-Krokan and Vegard Bye, he was drawing a line from the fall of the old Soviet until the new friendship between Cuba and USA. How fast should Cuba open the border and invite foreign initiative? Perhaps it´s more wise for Cuba to wait a bit, and not rush into a new relationship risking domination? There are reasons to believe that other countries in Latin-Amerika is waiting in a line to enter the new deepwater harbour right outside Havana, Mariel.

Without doubt, the first thing to be done, is that USA has to remove Cuba from the list of terrorist-nations. – Then it will be interesting to se how Cuba is facing the lack of no enemies, expressed Borghild Tønnessen-Krokan, from UNDP.

USA enforced the political leftside. Expressions as “Better to be dead than red”, from the USA gave more nourishment to the Castro-brothers. What now?

Will we se them on Facebook? I think the first one to enter the cuban harbour, is an Internetcompany to fix the slowest and most expencive Internet in the world. Cubas government doesn´t get support from the new generations without logging on.

2 thoughts on “Can I soon send Castro a friend-request on Facebook?”

© Birte Hegerlund Runde and cubarunde.com, 2014. Unauthorized use and/or duplication of this material without express and written permission from this blog’s author and/or owner is strictly prohibited. Excerpts and links may be used, provided that full and clear credit is given to Birte Hegerlund Runde and Cubarunde.com with appropriate and specific direction to the original content.